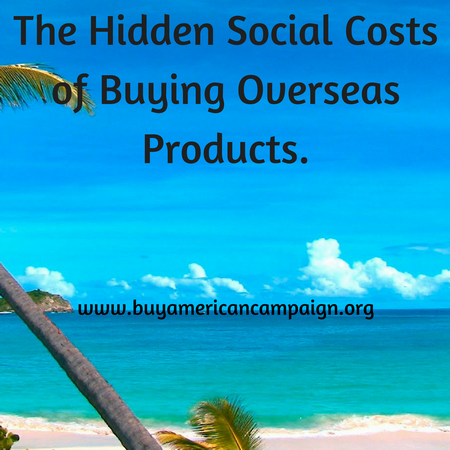 Hence, this article would emphasize more on manufacturers going overseas to manufacture products.

American manufacturers declare that going overseas is their only option if they are to remain competitive against foreign business competitors. It’s either overseas production or no production at all. As powerful as this matter in hand appears to be, it doesn’t hold up well in light of various basic facts.

To start with, a growing number of U.S organizations are responding to the import threat by bettering their competitive position at home. They really are very much convinced that setting up long-term competitive advantage involves a dedication to a different way of carrying out business—not just a shortsighted attack on labor overhead.

Overseas production is not the only alternative designed for organizations under competitive siege. It is indeed, an awful alternative for many organizations. Managers should be aware that overseas production is not all roses and labor cost savings. Before they make the move, they need to possess a better image of where they’re going. They need to realize that there are a number of powerful factors not to go overseas.

It is accepted that organizations can often reduce costs on labor and materials by buying or producing overseas, but some other costs, some not so glaring, may possibly offset the profits. Overseas production in most cases requires larger inventories, for instance, and also, increased managerial costs. Products made overseas are much less likely to meet up with specifications; as a result, good quality costs could be much higher, such as increased transportation costs and tariffs and don’t leave behind the cost of training foreign workers also.

It takes a longer period of time to get products from an overseas location; therefore companies operating overseas are slower to react to changing market demands, which as well has its price. In 1984, several big U.S retailers were stranded with large inventories of imported products they had placed an order for the year before when a slowdown in consumer spending was nowhere in view.

All these expenses seem apparent but companies seldom take them into consideration when coming up with the overseas production decision. Based on a study commissioned by the National Tooling and Machining Association, American tool and die manufacturers usually disregard these “hidden” costs of overseas production. Yet based on the study, these costs typically add 5% to 15% to the overseas vendors’ offer price for shipping and delivery, 3% for extra documents and communications, 5% to 10% for additional stock and up to as high as 35% for unforeseeable modifications.

Some other costs are much less direct; shifting several production operations overseas may prevent the organization from taking advantage of economies of scale at home and even overseas. The effects can be extremely devastating in the course of a recession. Going overseas may also result in under-utilization of existing production capacity and eventually, plant closings and layoffs.

Ultimately, organizations that move outside the United States could lose important customers who may move to some other U.S based suppliers. Italian chip manufacturer, Dynamit Nobel Silicon is among the overseas manufacturers that established a factory in the U.S to be nearer to its American customers. The managing director explained the decision by declaring that “the distance between Italy and California is such that people would not like to enjoy any more than 10% of their demands from us.”

Offshore manufacturers should take the above points into consideration and invest in the U.S. That way, American consumers would have difficulty in buying overseas products and would be left with no other choice than to buy the American made products which will consequently help to build and maintain a stable, growth-oriented American workforce and economy.