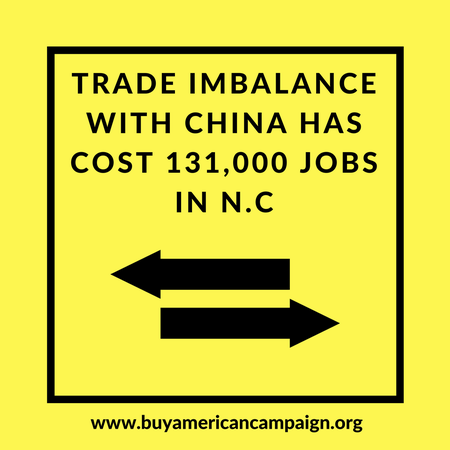 The loss of North Carolina jobs tied to the American trade imbalance with China may have peaked about a decade ago.

However, the ripple effect continues to be felt in the state, particularly in the high-tech sector, according to a national study released last week.

The Economic Policy Institute, a left-learning nonprofit research group, reported that North Carolina has lost 131,100 jobs, primarily in manufacturing, since 2001 because of trade policies deemed more favorable to China than the United States.

For 2015-16, North Carolina has lost 10,500 jobs from the trade imbalance, the Washington-based institute determined.

Mark Vitner, a senior economist with Wells Fargo Securities, said the disruption “unleashed by opening up trade with China was severely underestimated.”

“We have been living with the impact in rural parts of North Carolina and Virginia for the past two decades. … Vast numbers of folks remain underemployed,” Vitner said.

The report comes as President Donald Trump is considering raising tariffs on Chinese imports, a potential response that opponents worry could provoke a trade war.

“The United States has a massive trade deficit with China,” said Robert Scott, the institute’s director of trade and manufacturing policy research.

“The growth of that deficit almost entirely explains the failure of manufacturing employment to fully recover along with the rest of the economy,” Scott said. “And as other studies have suggested, the trade deficit has cost us millions of jobs since China entered the World Trade Organization in 2001.”

North Carolina ranks sixth in terms of jobs lost because of the China trade imbalance and fifth highest in terms of percentage of lost jobs, at 3.12 percent, the institute said.

North Carolina’s 5th, 6th and 12th congressional districts have lost a combined 34,700 jobs, about 3.5 percent of the combined employment level within the three districts.