The Decline & Rebirth of American Manufacturing 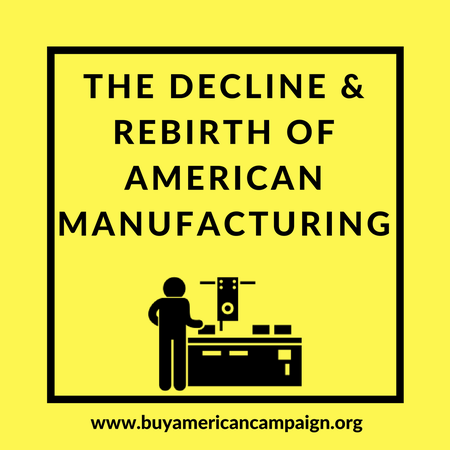 From 1998 to 2013, America lost 5.7 million factory and manufacturing jobs to overseas facilities and the outsourcing of materials, products, and goods needed for the manufacturing industry.

Many supporters for keeping manufacturing overseas have stated that bringing the manufacturing jobs and process back to America would be a waste of time since robots and automation have replaced many of the jobs that were lost in the 1990’s.

Their argument is valid and they do bring up a good point of how much the manufacturing industry has changed due to technology, but there are still positive aspects to bringing manufacturing companies back to America.

The companies that have already taken the plunge have shown that just because they are moving back to American soil doesn’t mean they have to have additional costs and raise their prices.

Even those companies that have revolved around automation like Tesla have found a new way to create American jobs. They are doing this by coming back to American soil, opening up new manufacturing plants, and creating new jobs within the manufacturing industry. Automation and robots can only do so much and with the rise in technology there is a new need for operators and people who know how to perform maintenance on these instruments.

As a direct result of the few companies who have already taken the plunge and come back to American soil, there has been a rise in the American economy. Manufacturing jobs still make up a good portion of the job industry in America. About 8.8 percent of total employment is made up of American manufacturing jobs and more are headed this way.

Companies like Tesla are working to bring back their manufacturing jobs to hard working Americans. Tesla has already invested five billion dollars into its Gigafactory. Not only has the factory resulted in an influx of money being spent right here in America, but it is projected to offer ten thousand jobs when it is finished.

The Gigafactory will be responsible for manufacturing lithium ion batteries. This is a plant where a lot of the production is automated and yet the decision to move their manufacturing plant back to their home soil has resulted in an increase in jobs.

The estimation of ten thousand jobs does not even account for the additional jobs that were created in the process. By building a new plant facility, that means more jobs for contractors, builders, and construction workers. Outside of the plant, distributions centers here in America will be employed to move the finished products to buyers. The trickle down effect of this one company had undoubtedly had a positive effect on the American economy.

Other companies have already made the move back to American soil. In 1991, the family-owned company, Bicycle Corporation of America moved the production of its bikes fully off shore. This cost many people their jobs and while it saved production value within the company, it had a negative impact on the local economy.

Two years ago that same company decided to bring back a small portion of their production process back to America. The Bicycle Corporation of America moved from China to South Carolina and employed one hundred and fifteen people in their facility. This year they are projected to produce three hundred thousand bicycles in South Carolina, which is the same as they made back in 1991.

The Bicycle Corporation of America does operate at a third fewer employees than it used to, but that didn’t mean that their decision to move back to America was wasted since their product gained value as a made-in-America product.

They are bringing in more revenue into South Carolina and have continued to flourish and keep up with the low cost benefits that came with moving their productions off shore.

When it comes to American quality manufacturing, the argument that bringing home companies won’t result in an boom in jobs like we saw in the 1990s due to automation and robots is true. However, it does make a difference and it does bring home an increase in overall economic stability and increased socioeconomic growth, even if it is not the same swell we saw during the 90s.

We might not ever return the era of manufacturing we saw before off shoring became the standard, but we can see a new era, one that comes with new kinds of jobs. These jobs will also allow us to be an industry leader with the advancing technology used in the manufacturing industry.

We don’t need to avoid the subject of American quality manufacturing. Nor do we need to have unrealistic expectations of what it could mean for bringing manufacturing back to the United States, but we can look to the future and embrace the change and find a new way to have our products made in America.

American quality manufacturing might have perished but the rebirth of its productivity is in process and with the help of organizations like the Buy American Campaign, the American public will find itself making better, more well-informed decisions in regards to their product purchases.

Do you have more examples of manufacturers bringing back American jobs? Contact us and tell us about it!