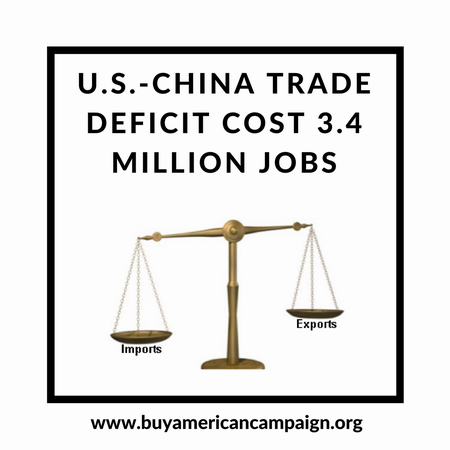 A recent Economic Policy Institute (EPI) report found that the nation lost 3.4 million jobs, mostly in manufacturing, between 2001 and 2015, as a result of a growing trade deficit with China that’s more than quadrupled since the country entered the World Trade Organization in 2001.

A news release sent Tuesday from Scott Paul, president of the Alliance for American Manufacturing, pointed out that the manufacturing sector, one of Tennessee’s largest industries, has especially suffered from the deficit, with a total loss of 2.6 million jobs.
“The bottom line is that our trade deficit with China costs jobs,” Paul said in the release. “A resurgence in American manufacturing is only possible if our trade relationship with Beijing changes dramatically.”

“This report leaves no doubt that China’s trade practices will continue to impede a true jobs recovery unless our policies change,” Paul said.

The report also found that Oregon had the highest percentage of employment lost (3.82 percent), with more than 65,000 jobs displaced, while California had the most total jobs lost — 589,100 or 3.59 percent.

Tennessee, which ranked 16th in regards to jobs displaced as a share of total state employment, lost 2.5 percent of its jobs to China between 2001 and 2015, the report said.