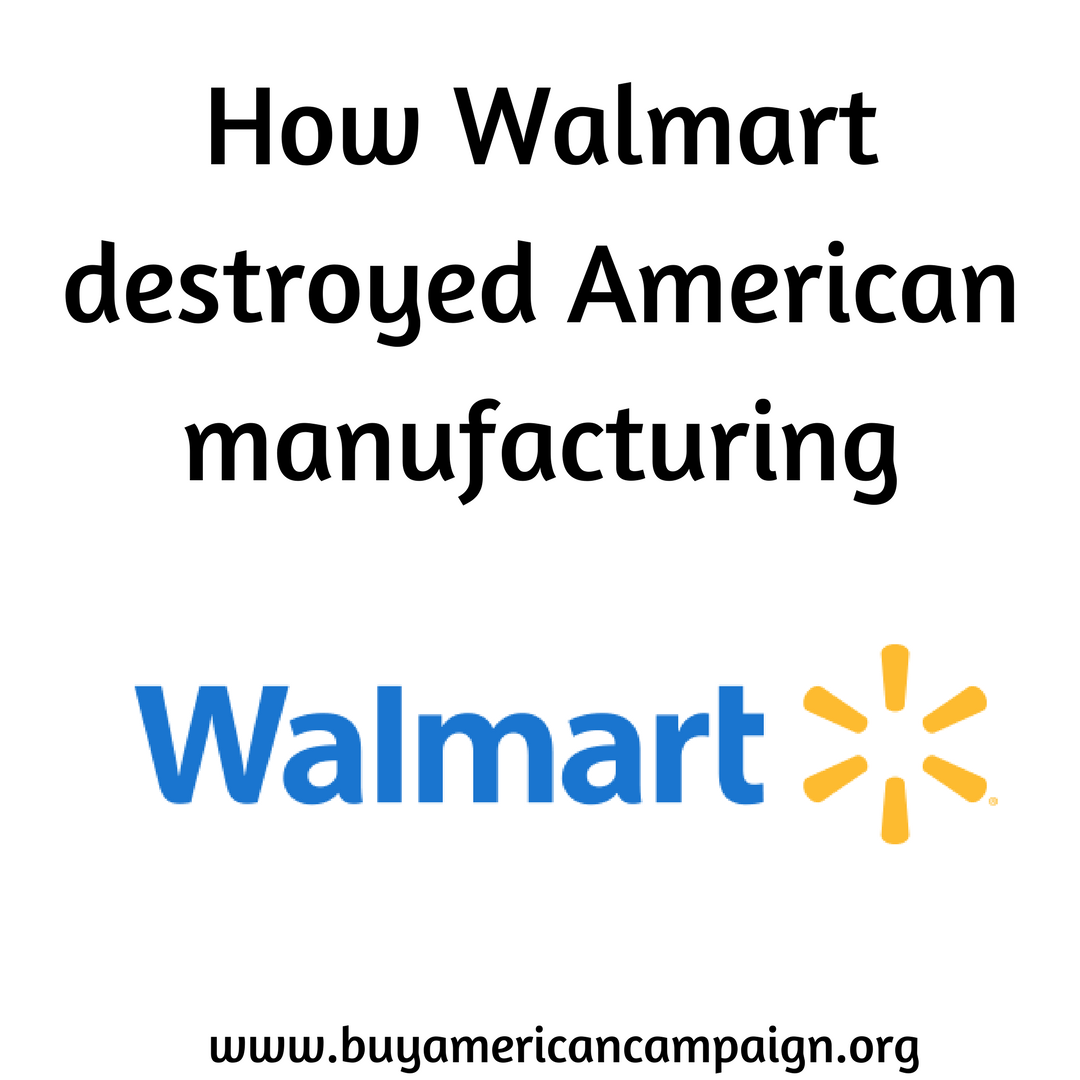 Within the past few decades, U.S. companies have been moving jobs overseas. Large corporations that employed several thousands of Americans have gradually packed up and relocated offshore.

Of course, this trend started long before Wal-Mart became a retail superpower. However, there is no doubt that the retail chain has grossly contributed in destroying American manufacturing thereby accelerating the loss of American jobs to countries such as China, India and other low-wage nations.

Wal-Mart has spent a fortune in recent years on conferences, advertising, and PR promotions in an effort to convince Americans that it cares about the nation. On the periphery, the company’s U.S. manufacturing initiatives appear patriotic enough, but here are some of the ways Wall-Mart has been involved in crippling American manufacturing.

First of all, Wal-Mart commands control for just one major reason – its purpose which is to bring goods at the lowest possible prices to its customers. The company, therefore, has a clear policy for suppliers – to supply at the lowest possible rate. In order to survive the retailers pricing demands, they lay off workers, close U.S. plants and resort to outsourcing products offshore.

Secondly, Wal-Mart is America’s largest importer. The retailer has held the position as the U.S. largest importer of goods for several years. Many of the company’s selected U.S. suppliers have continued to import most of their goods such as bicycles and televisions. As for products labeled ‘American-made’ or ‘American-assembled’, these suppliers import a majority of the product’s components.

Another factor is that the company thrives on low wages. For any of the retailer’s U.S. manufacturing deal to click, extremely low labor is required. American manufacturers have been put in harm’s way because Wal-Mart’s uncompromising demand for lowest rates has driven these suppliers to hunt for lower prices overseas.

Furthermore, Wal-Mart has destroyed U.S. manufacturing by giving non-American companies direct access to the U.S. market. Wal-Mart is big and centralized; therefore it has the capacity to link oversea suppliers into its digital system. With the company’s global reach, it’s easy to switch to offshore sourcing faster than the traditional norms of retailing.

Americans love ‘Made in America’ and Wal-Mart knows Americans will pay more for it. The retailer is designed to sell more goods at higher profit margins. Americans are willing to pay higher rates to keep their compatriots employed, a recent survey has shown. The retail giant knowing that consumers would prefer goods made in the U.S. has always made sure its product packaging particularly communicates that the products support American jobs, whereas the reverse is the case.

It seems Wal-Mart is set to apply different tactics in order maintain its dominance in the retail sector and this will continue to affect American manufacturers negatively. The consequence is that quality middle-class jobs will continue to depreciate.

In order to really rebuild manufacturing in the U.S., Americans need actual manufacturing not just having products assembled in the country. Until American factories resume work, things may get worse. There is a need to get large corporations not to develop too much appetite for money, to think home and become more patriotic.