What’s Up With “Made In America?” 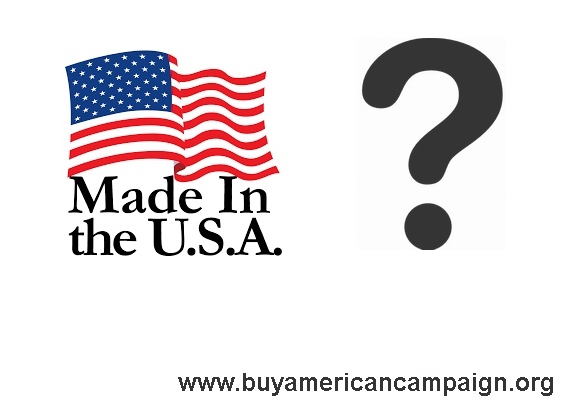 Many political debates have revolved around whether products sold in the United States should be manufactured in the United States and whether or not imported products from other countries harm the US economy. Both history and current economic models show that in-country manufacturing creates jobs, boosts local economies, and enhances the lives of millions of Americans. So, what’s the debate really about?

Lobbying efforts and consumer interest has been the driving force behind this shift toward positive association with American manufacturing. Businesses who host the majority of their manufacturing processes overseas have in turn panicked over the implications of increased manufacturing costs since it is almost impossible to pay the same rate to both skilled and unskilled US workers.  Protecting their interests becomes largely about convincing the politicians to push through laws that serve those interests.

One of those proposed changes has to do with informing consumers of their products origins. Specifically, lobbying efforts are proposing that companies will no longer have to place country of origin on their merchandise, leaving the consumer to guess whether they’re assisting local economies or ones abroad.

This is largely thought to be a failing measure by most due to the FTC’s (Federal Trade Commission) stance on the labeling of goods sold in the USA, AKA all goods have to display country of origin. However, this check is far from foolproof.

The Federal Trade Commission’s policy is based more on the origin of the product content than on the final location of the manufacturers of the product, meaning “made in America” can actually mean “made in Taiwan” so long as the materials which the goods are manufactured with originate in the USA.

This is something that directly contradicts what most American consumers have come to associate with the “made in America” product advertisement. Even though the policy itself has undergone periods of relative dormancy, the policy is now, and has been for several years, the subject of active and continued reinforcement efforts of the Federal Trade Commission.

The Federal Trade Commission’s policy on defining the “made in America” label for products and goods sold within the United States falls within the Federal Trade Commission’s broad jurisdiction responsible for regulating deceptive advertising. The regulation of deceptive advertising applies to claims in advertising, labeling, and other claims regarding promotional materials. This extends to digital and other electronic formats.

Once the “made in America” claim is an objective claim, the Federal Trade Commission requires that the claim be supported and must be substantiated through truthful findings and evidence. The Federal Trade Commission’s policy on defining the “made in America” label encompasses two types of origin claims for products and goods sold within the United States. Those two types are qualified and unqualified origin claims.

The Federal Trade Commission’s requirements for qualified origin claims for products and goods sold within the United States allow for substantial flexibility. This is beneficial for companies because it helps with marketing and branding of their product. If it is mildly deceptive, it’s thought to be well worth the potential risk since polls show that majority of people would prefer to buy Made in America products. For example, the manufacturer may state that the product or good is made in the United States with imported parts.

This policy also allows the manufacturer the freedom to specify the country of origins if they choose to do so or not disclose it if they feel it would hinder their efforts to sell and make a profit off of the product they are distributing. Meaning, so long as the product’s origins is disclosed to the FTC, they may or may not, at their discretion, disclose that information to their consumers.

Confused yet? The policy is extremely vague and parts have been tacked on over time to try and accommodate various problems that have come up in an effort to clarify. Unfortunately, this has made the policies ever more murky over time.

“The question becomes: how do consumers encourage companies to move or keep manufacturing processes in America?”

Also, the Federal Trade Commission’s policy for qualified origin claims on goods and products within the United States doesn’t require the manufacturer to disclose the source country for specific parts or the percentage of foreign parts so long as the United States content or processing is significant.

This is good news for manufacturing plants that may be based in the United States but have to outsource certain materials from other countries due to the limitations within the United States for such materials. This is one instance where the FTC’s policies aid rather than hinder the advancement of American manufacturers.

These products have no more than a negligible amount of foreign content. The restrictions go even further by stating that the manufacturer must meet three criteria before claiming “made in America” for their product: The last significant manufacturing process has been done in the United States, the product must have a high proportion of United States content in comparison to foreign content, and the product or good must not have foreign components that consumers would reasonably view as significant to the final product.

This is where some manufacturers run into problems and where many Americans view products that have been labeled as made in a foreign country as having major sources of off-shore manufacturing involved in their process. This simply isn’t true for some manufacturers and it becomes increasingly difficult to really figure out which are truly American manufactured products and which are not.

A common misconception is Americans tend to view items labeled as “made in America” as being good for the economy and supporting local manufacturing jobs when this label can be very misleading. Larger corporations tend to be able to find ways around the FTC’s labeling system that smaller manufacturers simply do not have the resources to subvert.

The question becomes: how do consumers encourage companies to move or keep manufacturing processes in America?

Defining the acceptable percentage for what is allowed to be foreign content and what needs to be genuinely made in the United States is where it becomes difficult to narrow down. Obviously, 0% is unacceptable, but what about something that is 40%? That percentage might be below 50% but suppose the company uses all the resources available to manufacture the product or good within the United States.

They are still employing Americans through as much of the process as is possible and that might be the best they can do right now on some products. That doesn’t mean that their efforts should go unnoticed. Hopefully, their attempts will be supported and encouraged and lead to a future where that percentage is more closer to the ideal 100%.

There is no short answer for how to encourage “Made in America” to 100% overall saturation in the American market. A few things will help though: clearer, easier to follow policies in government, tax breaks that encourage manufacturing to stay within in the US, and educating the general public in how to select American manufacturers from the pool of less-reputable companies masquerading as Made-in-the-USA.