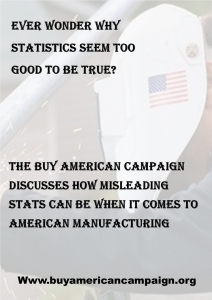 We’ve already touched on the idea that having more focused education in technical vocations and tailored degrees for manufacturing are the ways to save American jobs in the American manufacturing industry. Per the many employers of US manufacturing industries who say that finding American workers who are qualified for the positions is next to impossible, it’s hard to figure out why people are not going into the manufacturing industry at the same rate of their predecessors. Part of the reason for this wide gap between the need in manufacturing and the steady supply of qualified graduates is the effective marketing campaign that has been pushing vocational studies and bachelor degrees that lead to manufacturing professions into a less desirable category for degree-seeking individuals.

Statistics to support the supposition that manufacturing professional degrees are needed are relatively hard to find since higher education, a multi-billion dollar industry in and off itself, has every incentive not to conduct or encourage any sort of polling process to find out how higher education stacks up to most vocational fields. They do, however, have many interesting infographics and graphs on how people with the broad term “bachelor’s degree” stacked up against people with “some college or associate degree.” Again, both of these terms are incredibly broad and would include every major field of study against college dropouts, associates degrees without a focus, as well as, those who hold degrees which are tailored to the manufacturing industry. Common sense will tell you that most college graduates have a higher rate of success in finding American jobs than those who have a high school degree and have not finished any other program of study.

This logical assumption is somewhat misleading however, since these terms does not separate out those who are underemployed, employed in a field which was not their major field of study, for example you now need a bachelor’s degree to become management in most major retailers, and those who attained degrees which have no correlation between the job field industry and academic study, degrees such as philosophy, Latin studies, history, etc. Furthermore, since these statistics are essentially tailor-made to make bachelors degrees, regardless of field of study, more appealing to the masses due to lower unemployment rates, it’s no wonder that when a recession hits people flock to their local universities to seek degrees.

Likewise, those holding associate’s degrees in vocational fields, technical fields, and other qualifying certificates for manufacturing employment were not separated out from the statistic concerning those in that degree range, making the number for that category at a 9.6%. Universities and colleges love using these types of statistical analysis to further their agenda: to increase enrollment rates in US manufacturing industries.

They put their comparisons onto billboards, in paid articles perpetuated in the media both online and on television, in large marketing campaigns that produce commercials, paid paper advertisements, school visits to high schools, and literature mailed directly to individual homes. All of these campaigns have the same message: enroll in our university or college and you will be successful in life.

To be frank, that is simply untrue.

A bachelor’s degree in philosophy stacked up against a manufacturing certificate will show a higher payout and a lower debt for the certificate holder 99% of the time. A campaign for the re-education and rebranding of the US manufacturing industries is desperately needed if we are to encourage our young people into the manufacturing workforce. The question is always, who is going to pay for it?

Until that complicated question finds a suitable answer, the first place starts at the most local level imaginable: with those young people in your life who are preparing to take the next step into adulthood. Educating them will at least start a conversation on the benefits of American manufacturing. If enough people have the conversation on a grassroots basis, it may lead to some interesting changes in the world of higher education where at least we can get some real answers when it comes to statistics regarding manufacturing employment.