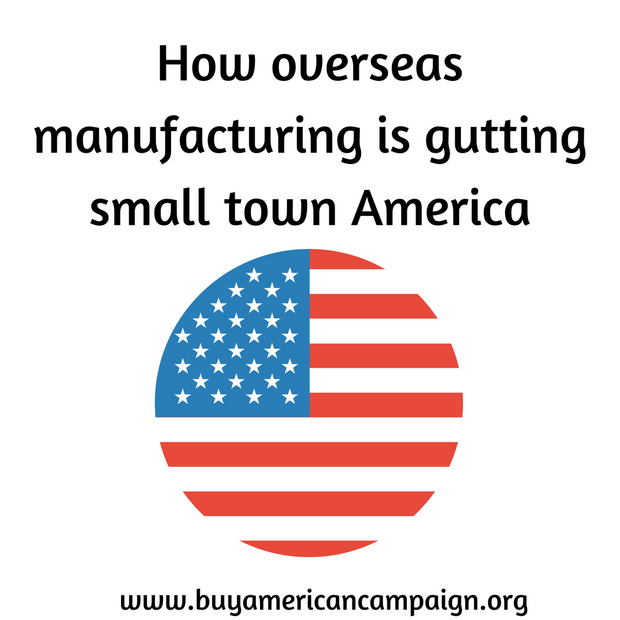 In the mid to late 19th century during the gold rush era towns would pop up out of nowhere.  Construction began, saloons opened, brothels were common, there was a need for doctors, dentists and merchants.  When there was “gold in them thar hills” communities thrived – until the gold ran out.  The local communities became “Ghost Towns” and most never recovered.

Fast forward to the 20th Century.  Early in this century once again towns grew and flourished not based on discovering gold, but rather by growing industry and technology.  Implementing manufacturing facilities that would employ 100, 1000 and even more to produce those very products Americans created.  And for many years life was good.  But the world did not stand still and globalization became a reality.

As a result, economists began encouraging outsourcing those American products we created to other countries.  Small towns who had manufacturing plants that had been producing products for years were moved overseas and jobs became scarce.  We all are familiar with what happened in Detroit with the automobile industry.  But what about the small towns?

For instance, in 2004 Maytag shut down a refrigerator factory for decades was Galesburg’ largest employer moving the work to Mexico.  Ten years later residents are still struggling and the city’s population is declining.  Median household income fell over 25 per cent over thirteen years.

This is just one example of how the NAFTA trade agreement signed into law by President Bill Clinton negatively impacted our own citizens.  Even though one of the basic principles of economics is that trade is good and more trade is better, creating fair trade deals between countries should be an integral part of that principal.  The struggles of one small town illustrates whether that principal is currently in the best interest of the American people.  Hopefully, new trade agreements will help level the playing field.