What Americans Don’t Know About Foreign Made Products 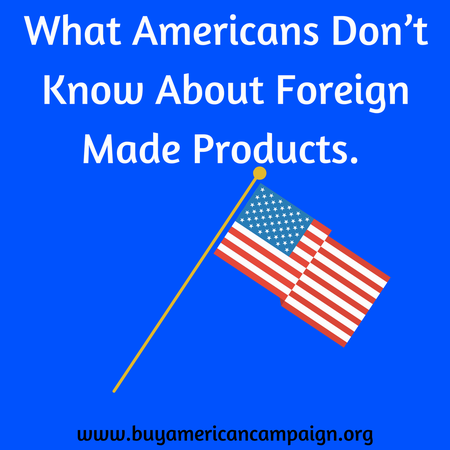 Unfortunately, even many of the most iconic US products might not be made in the country anymore. As US companies move manufacturing facilities offshore to supposedly cut costs, more and more products sold under known US brand names are turning out to have been produced by foreign hands.

As a quick example, let’s look at major league baseball — one of the most all-American pastime’s. Every pitch thrown on the field uses a baseball from Rawlings Sporting Goods. But did you know that none of those baseballs are actually produced by Americans?

Instead, Rawlings hands the production of both major and minor league equipment to factories in Costa Rica — staffed, of course, by Costa Rican workers. And if you’re not in the leagues, you’re probably using one of Rawlings’ lower-end baseballs, which are manufactured in China. The name on the product might be American, but it isn’t always the US manufacturing sector that benefits from our purchases.

Conversely, you can’t always dismiss a foreign brand on name alone. Many foreign car brands like BMW, Hyundai, and Volkswagen, for example, operate plants and assemble units in the US. In fact, the top 5 models in Cars.com’s 2016 list of the most American-made cars are from foreign brands Toyota and Honda. The two-year top-notcher, the Toyota Camry, supports the most US-based assembly plant jobs by a margin of thousands. And as an example of an American company that’s pulling back on outsourcing, Michigan-based Whirlpool, which used to make the bulk of its washers in Germany, has been steadily investing millions in US-based facilities over the past few years.

Of course, nobody has the time to do in-depth research on the manufacturing practices of every company we buy from. But some products like cars are required by law to bear labels specifying the various countries of origin of their components and manufacture — and for those that aren’t, we can seek out resources like the Buy American Campaign that help point us in the right direction.

Buying made in America isn’t as simple as looking at the brand name anymore. Luckily, many homegrown companies remain transparent, upfront, and proud about their use of American materials and labor. At the very least, we can put a bit of effort into seeking them out. After all, our dollars count: as Ford’s recent push to develop its Michigan factories shows, widespread clamor for made in America items sends the message to these companies that consumers care about where and how their products are made.

Speaking of “how,” many products manufactured overseas still benefit from unfair labor practices, from unsafe working conditions to child labor. Many of us might remember the 90’s furor over sweatshops, especially in the clothing industry. But not a lot of people may know that these terrible manufacturing practices persist to this day.

China, India, Bangladesh, Cambodia, and Indonesia are some of the manufacturing hubs for products ranging from fast fashion to cheap toys, and they also happen to be the sites of countless exploitative labor markets. Just last year, the Asia Floor Wage Alliance released reports exposing the pervasive rights violations and abuses faced by garment workers in these countries. Whether sold off-brand or as cheap branded items, these foreign-made products come from the blood and sweat of exploited foreign workers–often literally.

Many of us believe that the US can’t compete with countries like China when it comes to lower manufacturing costs. The price tags on foreign-made products seem to confirm this: a lot come in a few dollars cheaper than items made in America. But here’s a striking fact: the cost of manufacturing products in many “cheaper” countries isn’t significantly lower than if they were made in America.

As early as 2014, the Boston Consulting Group’s research into manufacturing cost-competitiveness across the globe showed that China is virtually on par with the US in terms of manufacturing costs. For every dollar that production would cost in the US, it would cost 96 cents in China–a negligible difference. As one of the study’s authors, Harold Sirkin, wrote in Bloomberg, “For many companies, that’s hardly worth it when product quality, intellectual property rights, and long-distance supply chain issues are added to the equation.”

That BCG study considered important factors such as energy expenses, currency exchange rates, and total labor costs. With the dropping cost of natural gas and the increasing cost-effectiveness of renewable energy, the US’ potential for energy cost savings alone is enough to keep it competitive in the global manufacturing field, especially with rising energy costs in previously-cheaper sites like Brazil, China, and Poland. America’s steady productivity growth puts it ahead of European competitors like Germany, too.

As it turns out, the assumption that the US just can’t manufacture products as “cheaply” as foreign countries doesn’t hold much water. Of course, the specifics vary by industry, but on the whole, there’s little reason for companies to give us foreign-made products in place of ones made in America.