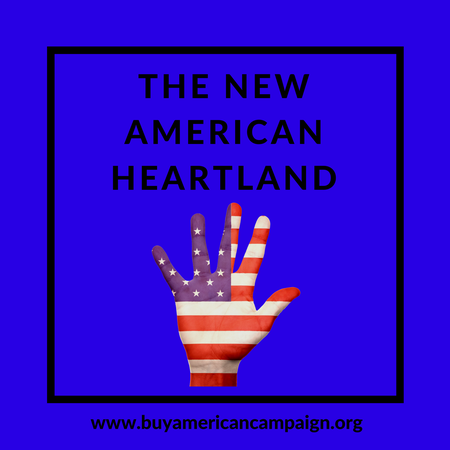 A report called “The New American Heartland: Renewing the Middle Class by Revitalizing Middle America,” produced by the Center for Opportunity Urbanism in Houston has recently been released. It says that the area of middle America from the Great Plains and Great Lakes of the north to the Gulf of Mexico in the south holds the key to the revitalizing of the nation’s middle class.

“While every region contributes to American prosperity, the New American Heartland has the potential to play a vital role in powering economic growth in the twenty-first century,” according the report.

The report goes on to say that manufacturing is the most powerful economic sector of them all and it has seen dramatic growth in the New American Heartland.

Manufacturing will probably never return to the levels that once existed in the region that became the Rust Belt, states such as Ohio and Michigan, but according to the report, the “New Heartland has the potential to emerge as the core of a single manufacturing super-region that includes newly industrialized zones of Mexico and parts of Canada.”

The states of Michigan, Indiana, Ohio and Tennessee alone have accounted for almost 40 percent of the new manufacturing jobs in the United States since 2010, according to the report.

“The benefits to the economy of a flourishing manufacturing sector, along with the energy and agriculture industries, justify making the promotion of manufacturing and manufacturing-enabling infrastructure central to a strategy for American economic growth,” states the report. 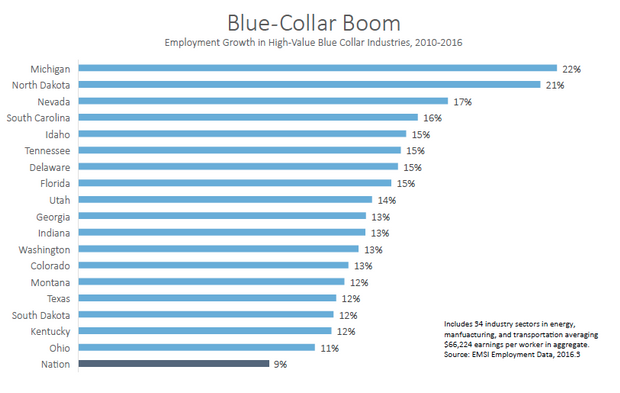 “For those with less than a four-year (college) education, it is the blue-collar work in fields such as installation and repair, construction and extraction, manufacturing production, and transportation that offer prospects of pay upwards of $15 per hour nationally,” the report states.

Ohio is among 18 states whose boost in blue-collar jobs from 2010 to 2016 exceeded the national average of 7 percent.

But manufacturing benefits other aspects of the economy as well, more so 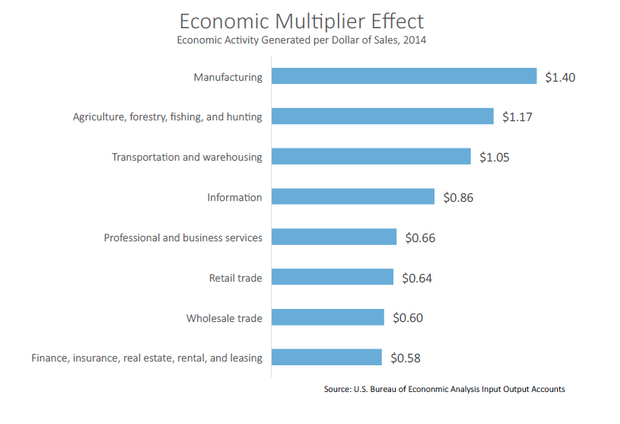 than any other sector. It does so through the multiplier effect, which measures the impact of $1 spent in one sector on the rest of the economy.

For example, one dollar of sales in the manufacturing sector corresponds to another $1.40 in economic output from other sectors of the economy, a multiplier that is far greater than for any other sector, according to the report.

For instance, professional and business services may employ a lot of people in high-paying jobs, but for every dollar that sector generates, it only creates another 66 cents in additional economic output elsewhere.