Buy American to Have the Best of the Best 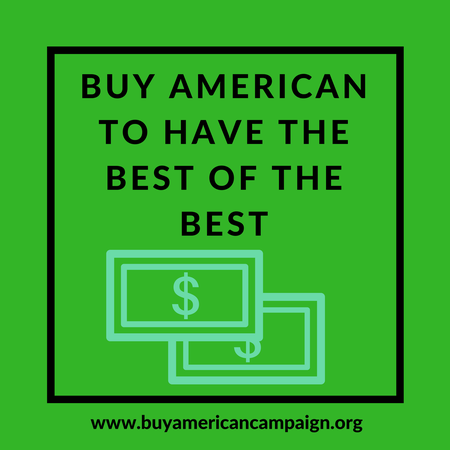 While most of our global society knows that American craftsmen are unmatched by few groups in the world. The “glow” continues to wear off on the rush to have foreign workers make products cheaper than US craftsmen, since although cheaper to buy, many foreign products come with questionable quality.

American manufacturing, long a staple of the US economy since World War II, has not played a critical role in the domestic economic health for the past three decades. But things appear to be changing (finally). Supported by consumers craving quality; the phrase “made in America/USA” is making a renaissance-like comeback.

Now, it is smaller manufacturing organizations that are a major player in this domestic economic resurgence. While these companies are smaller, they are making the largest impact on the return of the mantra, “made in America with pride.”

The future of the “Buy American” renaissance may be fueled by local manufacturing firms. Many expert observers agree. While former industry giants of manufacturing, such as steel and shipbuilding (can you say, “rust belt”), continue to struggle, smaller local manufacturing companies now stretch from coast-to-coast in the US.

For example, Edward Field, based in San Francisco, made the hard decision to produce products in America. Founded by an entrepreneur, Teddy Winthrop, Edward Field not only manufactures its products, but controls its distribution channels, selling directly to consumers.

As founder and CEO Winthrop says, Edward Field, is “an American accessories company.” Formerly working with his brother at American Giant, Winthrop had input into American Giant’s original single product, “the best hoodie ever made.” Edward Field focused on making a quality phone wallet. Winthrop states, ”I wanted to keep track of my two most valuable items, my phone and my wallet. I combined both items because I felt it was easier to keep track of one item, instead of two.”

Winthrop focused on manufacturing American made products and creating new jobs in the US. This was not boundless patriotism, but features sensibility. Logically, it made great sense to make these products locally, close to home.

Many local manufacturing firms agree with the mission of Edward Field. Its CEO keeps it simple. By making our own products and direct selling to consumers, “we eliminate most of the distribution costs and large marketing budgets,” which typically are necessary with overseas manufacturing efforts.

The ‘Net has made it easier to shop online and permits small local companies to operate as large multi-national companies formerly did. Even Internet marketing campaigns are more cost-effective than typical prime-time TV ads. Instead of mega cost 20 to 30 second TV ads, the 24/7/365 nature of the Internet can make money even while you’re sleeping.

If you have a good American manufacturing idea, the only problem you face is keeping your facility active for one, two, or three shifts. Is it possible that local “American made” products will be the foundation of a strong American economy once again?